Ineke Kievit
Ynnovator at the Municipality of Goeree-Overflakkee (the Netherlands) At age 49, Ineke will celebrate her 25th anniversary as a governmental employee this year. She didn’t start her career in the public sector, however. Coming from the commercial sector, she really had to get used to the way government organizations operate.

Ineke’s curiosity leads to many why-questions, which is her enabler towards creating improvement in her organization and within the Dutch government. “When I started working for the municipality, it felt like setting a step back. It really took me some time to get to know the rules and the structure.”

Which innovation challenges do you encounter in your work?

Well, one of the main things is that we still have a lot of meetings all the time. They take up a lot of energy and aren’t always effective. Another challenge is that our organization is very solution-driven. We tend to start thinking about solutions right away, instead of exploring the problem first.

We very enthusiastically start things, but then after a while, the process stops. The fact that we don’t take the time to get a real feel for the problem has to be part of that. Because of this, the follow-up is also challenging. We tend to start without having a clear vision of the steps afterward. 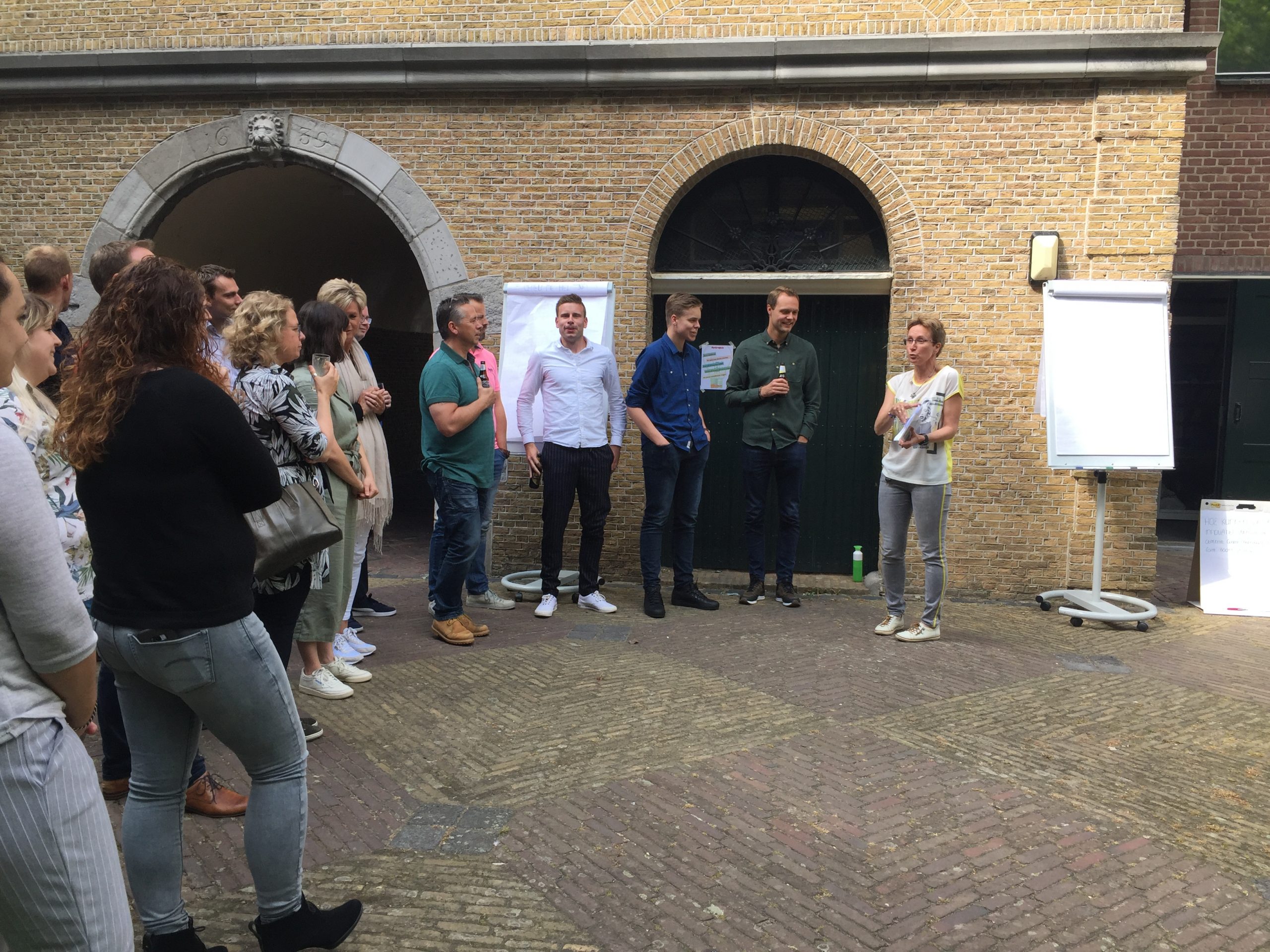 The Idea Carrousel is great when you facilitate a workshop alone 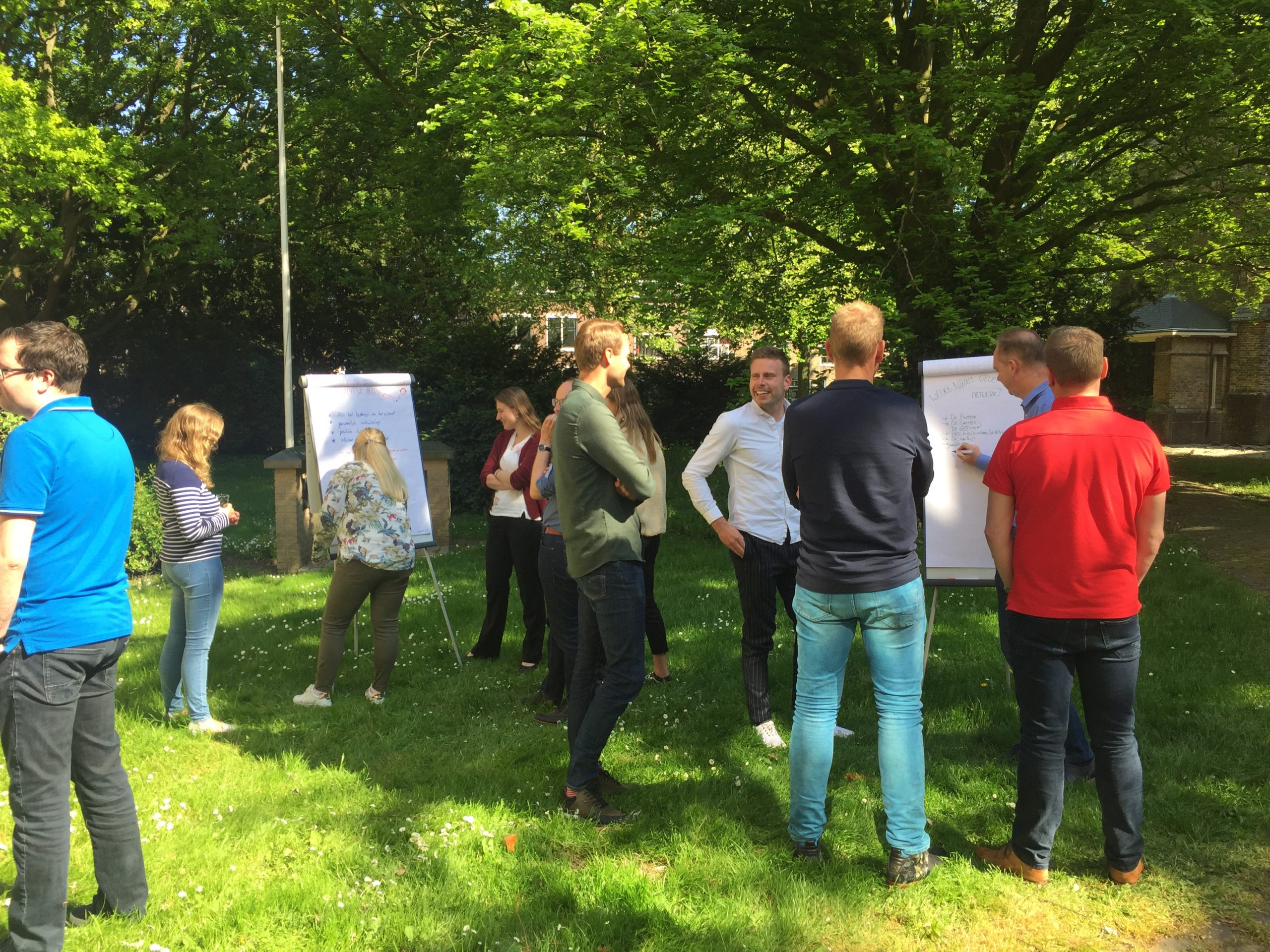 Keeping it fresh: facilitating an innovation workshop outside! 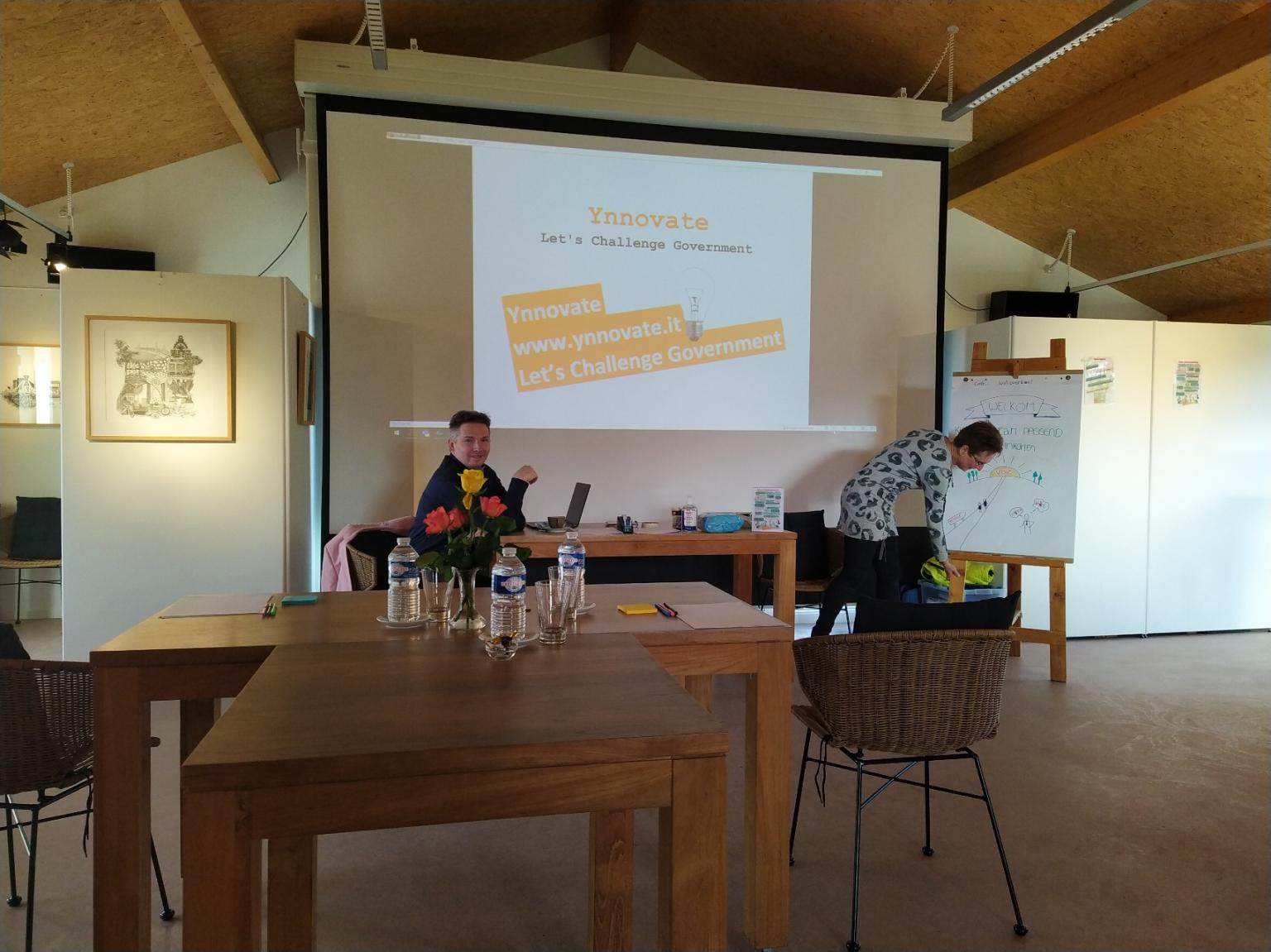 Ineke in action! Just about to start a Ynnovate ideation workshop

The fact that we are in a quite new organization probably also adds to that. Ineke works for the municipality Goeree-Overflakkee in the southwest of the Netherlands. The municipality merged eight years ago. “At first our organization was a mix of cultures. It took time to get to one common vision”.

We should put more effort into working according to the scrum-approach: creating small steps so we can see the results earlier and stay motivated

It is important to think about these things before you start innovation. Otherwise, people get demotivated. They put a lot of energy and effort into a project. It’s demotivating to see that after that nothing happens with the results. I feel that we should put more effort into working according to the scrum approach: creating small steps so we can see the results earlier and stay motivated because of that.

The COVID-19 epidemic does change things at work though. Some of our processes had to be changed and there suddenly was acceleration.

Is that why you decided to follow the Ynnovate Training?

Well, our municipality was merged into a larger municipality in January 2013.  Due to the merge of six organizations (four municipalities, a partnership environment, and sheltered employment), this organization became about ten times bigger than I was used to in terms of staff. Along the way, I came into contact with my colleague Sylvia (who had already followed the training, red) and she said that the Ynnovate Training could definitely be something for me.

Sylvia was the sole one who knew the Ynnovate method in the organization at the time: “Before I decided to follow the Ynnovate Training I participated in an innovation workshop where she used the Ynnovate method. This made me very enthusiastic. It wasn’t ordinary what happened there; it was a very different energy that I didn’t encounter in normal meetings.

I participated in a Ynnovate workshop before following the training. This made me very enthusiastic; it was such a different energy!

In October 2015, I followed the Ynnovate Training and at the moment I have facilitated around twenty innovation workshops. In 2016 / 2017 I also followed the Allround Ynnovator Program. Our organization has an academy and Ynnovate was part of that. If there are any challenges to be solved with a creative mindset, we are approached, usually directly by a challenge holder, to facilitate an innovation workshop. By helping solve challenges in the organization using an innovative approach, people knew how to find us pretty quickly.

How do you apply the Ynnovate method in your work?

We often do not use the standard Ynnovate approach. Rather we use elements from the method. However, we always do an icebreaker introduction. After that, we insert the techniques and steps that are necessary to solve the challenge at hand. This can be generating innovative ideas with a group, but we also help develop existing projects.

The Ynnovate method is the basis, onto which I add different techniques and working methods to stay innovative. I think it is important to keep it fresh to keep it stimulating for everyone that is in your innovation workshop.

The Ynnovate method is the basis, onto which I add different techniques and working methods

This means that I sometimes have to push myself out of my comfort zone as well. For instance, when a group of young employees was setting up a youth network within our organization. They asked me to help and since I was facilitating on my own, I decided to use this new technique, called the Idea Carrousel. It was a bit scary, but it went really well and the group had an amazing amount of results!

What has being a Ynnovator brought you personally?

Especially personal growth. I used to be shy. I did not dare to stand in front of a group. I still remember that I had to do a book review and I had a hard time getting out of my words. In the new organization, I was given a lot of space to do things my own way and I dared more. Being a Ynnovator has helped me with that.

I nowadays know what I can and what I can’t do. It does not always go as planned, but as long as you are flexible to deal with it on the spot, you’re fine! You don’t always know in advance whether something will work. The fact that the group does not know your plan gives you a lot of space and freedom.

Which working method (s) do you regularly use in your work and what are the benefits?

I recently held three problem exploration workshops. They are great to get to the bottom of an issue. We used the two sides technique (facts and assumptions) for example to get a clearer view of the challenge at hand.

I also often use the Ynnovate card sets. You can use them to give people a different focus in so many ways. I use them as an icebreaker at the beginning of the workshop. Or at the end of the workshop by asking people to give their final thoughts. During idea generation, I let people look at the problem through the eyes of Superman or Pippi Longstocking.

The innovative technique of the Idea Carousel is also especially nice if you have to supervise the innovation workshop on your own. It allows you to facilitate a big group of people without taking all the workload on your own shoulders. The fact that you put the group in charge also creates a lot of peace of mind for the group.

And last but not least, the Stakeholder Map and the Empathy Map are very nice tools. They are so valuable when you start with a problem. It’s a great way to clarify who the stakeholders are you dealing with. It makes the whole context of a challenge very transparent.

Your ultimate tip for people that get started with innovation?

Just start doing it! Experiment and you will grow immensely.

Also, make sure you invest enough time in doing a proper intake with the challenge holder. This will ensure that you know you are on the right track. It prevents you to waste precious time and energy on the wrong topic. Ask a lot of questions to determine how you can best set up your innovation workshop.

Listen to your feelings when it comes to innovation. There is a lot of gut feeling involved.  Sometimes you see opportunities to help someone with the Ynnovate method, but sometimes you have to decline to work on the challenge. For instance, when you don’t get a good feeling about the problem that has to be solved.

A challenge holder can be very confused when you say you want to do a problem exploration workshop because they might feel the problem is already clear. If you feel that deep-diving the issue is valuable, adjusting your wording to get the challenge holder on board is important. 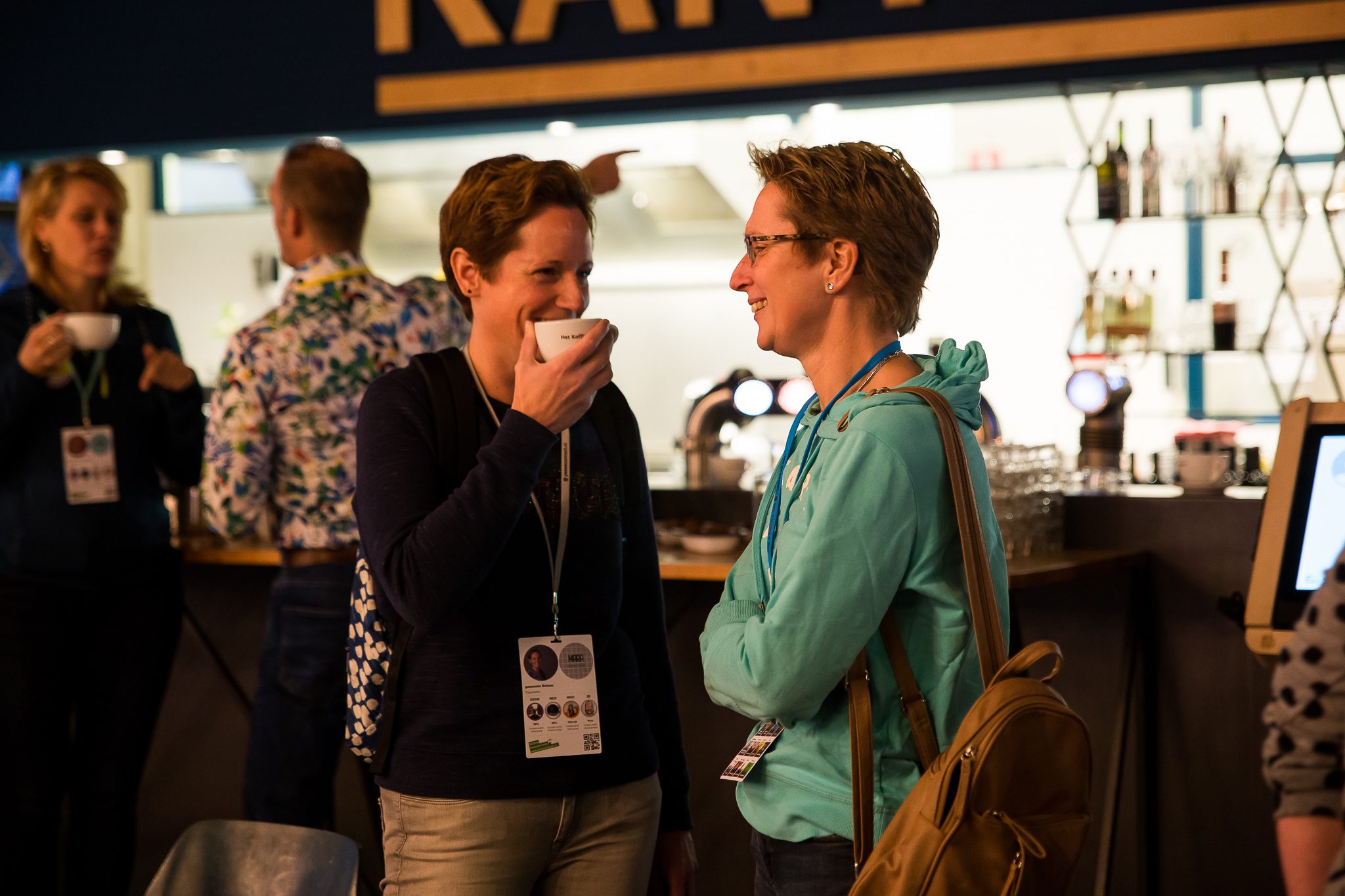 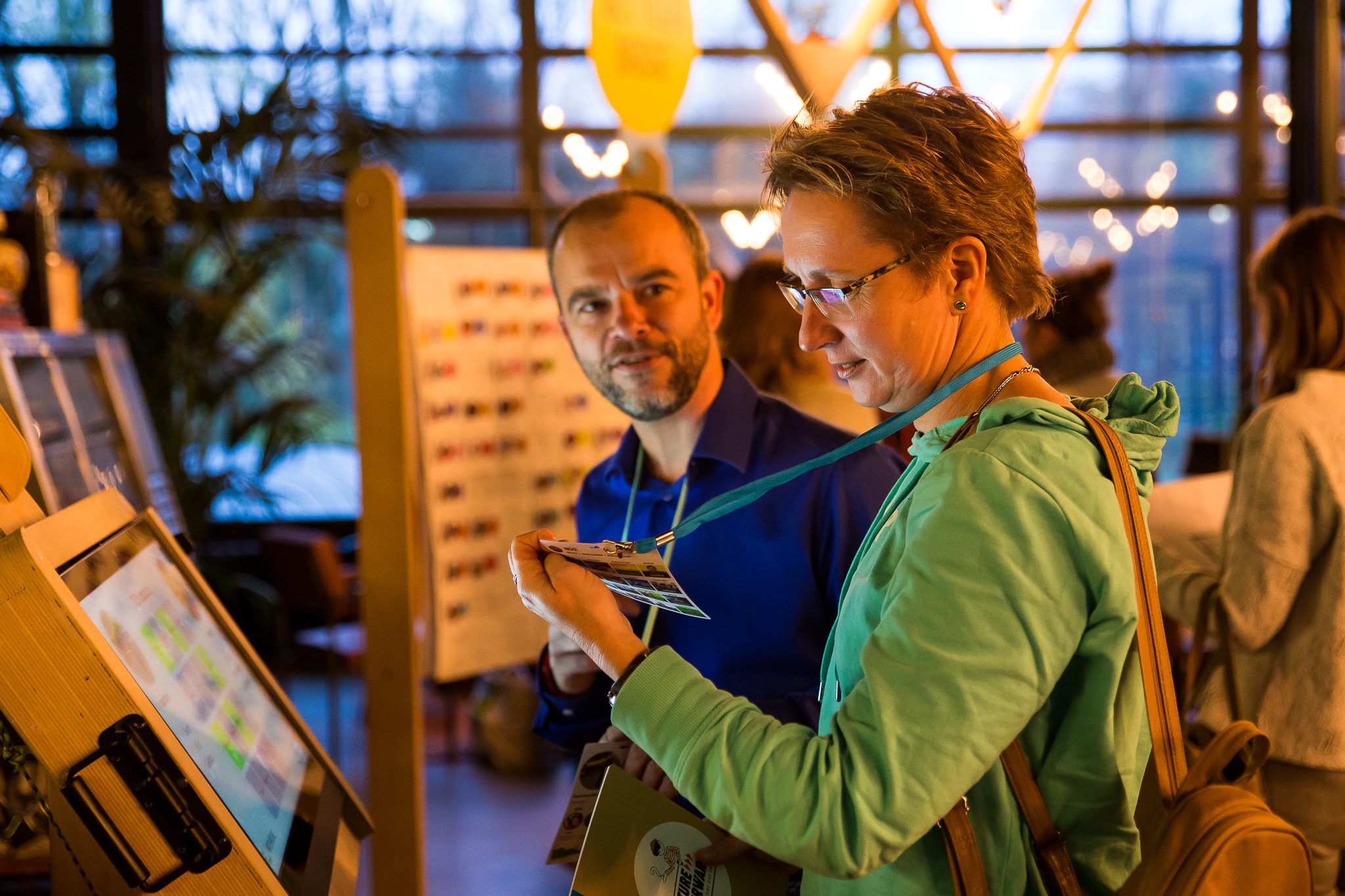 Concerning the Ynnovators network: I really like the fact that as we come together now and then. It is good to get to know more people who work on innovating in their organization. The network is already very extensive. That is why the Ynnovator Days are very important for me, just like the Ynnovate College Coffees and Ynnovator coffee dates. It’s nice to talk to each other and discover that you run into the same things.

Connect with Ineke on Linkedin

Let’s Ynnovate is a network organization that strives to make the public sector more innovative.

Over the years we have created a proven innovation approach and built a network of 1.500 skilled Ynnovators that use this approach.

Join our mission and boost innovation in the public sector together with us!